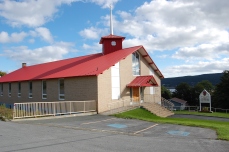 The history of the Bethany United Church Congregation can be traced back to the action of the local residents of Carbonear, Mosquito and Harbour Grace. In a written document dated November 22, 1765 these residents asked Mr. George Davis, a local merchant of the era, who also resided in London part of the year, if on his return to England, he would seek out a Protestant Minister of the Gospel, to come and reside among them for an annual salary of one hundred pounds.

Who could imagine back then that he would make contact with an Irish Preacher, formerly a Roman Catholic, who about fifteen years earlier was converted to Methodism at Drummersnave, Ireland? Not only was he converted to Wesley’s Methodism, but would later be ordained an Anglican priest on April 25, 1766. This Irish preacher, Laurence Coughlan would come to preach to the Roman Catholic people, the Anglican people, but most of all to this new religion, John Wesley’s Methodism. His coming to Carbonear and area would lead this new religion (Methodism) to become one of the strongest in this province.

Our congregation’s first church was built by the inhabitants as early as 1766 and was used for approximately twenty-two years. First by Laurence Coughlan, then by lay preachers led by Thomas Pottle and for three years by the first official Methodist minister to come to Carbonear, Rev. John McGeary. It was under his leadership, in his third year here, that our first official Methodist church was opened on August 1, 1788. We know little about this church other than that it had a cottage type roof and it was located in the center of the present cemetery on the north side to the extreme south.

This first official Methodist Church served the congregation for twenty-eight years. With an ever increasing number of people joining the congregation, this building soon became too small. A new church was planned during the summer of 1814 and on December 25, 1816, Christmas Day, our second Methodist church was opened. It was in this church that six missions of the Methodist Church met, chaired by John Gosse of Carbonear and made a very important decision. It was at this meeting that it was unanimously recommended to extend their work to different parts of the island of Newfoundland. At this time there were only six clergymen on the Island preaching Methodism. By the end of 1816 this doubled with six new appointments of new missionaries.

The church was only open for about six months when a disastrous fire occurred on June 18, 1817 totally destroying the new church. All caused when a flanker, from a half a mile away, landed in some shavings next to the church. The mission house was saved but fifteen other buildings belonging to local residents were not so lucky and they were lost to the fire.

With no church this was a terrible set back for the congregation. Although this new church was burnt to the ground, they would not give up. Immediately they found a temporary large store and continued their meetings.

Over the next three years the congregation made plans to construct a new church, and on November 12, 1819 the third church for this congregation was well underway.

This new church was an elegant one measuring sixty feet by forty-five feet with a cottage type roof. The church was opened during 1821 with a seating capacity of one thousand. For the next fifty-four years, this new church would serve the Methodist population of Carbonear, with thirty-four ministers leading the way.

During 1864, with Rev. John Winterbothan as minister, an attempt was made to open a second Methodist church in Carbonear. The south side residents of Carbonear, now growing in numbers, felt they could support a church. However, due to setbacks and bad years in the fishery, it would take ten more years (1871) before Carbonear had two Methodist churches, one on the north side, one on the south side.

With a new church now open on the south side and the Methodist membership continuing to grow on the north side, the need arose for a new church here as well. The present church was getting old and couldn’t hold the congregation wanting to attend. A decision was made to construct a new and larger church. This new building was constructed at a cost of $8000 and had a seating capacity of fifteen hundred people when completed. The dedication of this church took place on January 23, 1876. With this church came a new bell, from Liverpool, England, as well as a new Pipe Organ built by Messrs. Conach & Company, Hedderfield, England. It contained fourteen sounding stops and eight hundred and fifty-eight pipes.

From 1788 to 1925 our present United Church was known as the Carbonear Methodist Church, both north and south side. During 1925 with the amalgamation of the Methodist, Presbyterian and Congregational Churches this changed. Officially after June 10, 1925, our church became The United Church of Canada, and has remained this way since.

During a congregational meeting of February 22, 1963, a United Church building committee was put into place to look at a new church building for the north side. On December 23, 1964, a special service was held for the closing of the old church which served ninety years. A capacity crowd was on hand to bid the old building so long. On March 1, 1965, the Town of Carbonear approved a permit to demolish the church. During construction of the new church, services were held in the United Church Regional High School.
On January 23, 1966, the first official service took place in the New Bethany United Church. The dedication service was held on June 12, 1966.

We also have available at the church office a complete history of our church since its inception in 1765. This book entitled “Blackfoots” can be purchased for $10.00.